Miss the thrills? Enjoy Luna Park in Coney Island’s classic coasters from the comfort of home (or wherever you are) with these interactive 360 virtual reality rides.
Don’t be shy, click the screen and look around – these videos are fully interactive.
And for those who have Virtual Reality headsets, these 360 videos are VR headset compatible. So, turn up the volume and experience the thrill of Luna Park in Coney Island, virtually! 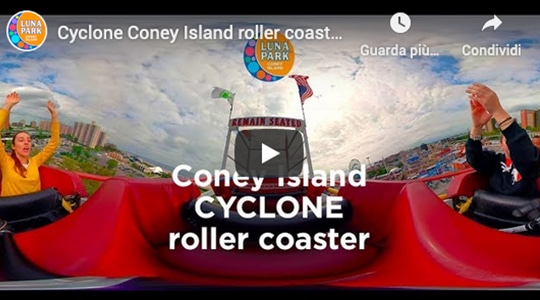 Since its debut on June 26, 1927, the Coney Island Cyclone has been a core fixture of the amusement district and is now one of Luna Park in Coney Island’s most cherished operating landmarks.** Located at the intersection of Surf Avenue and West 10th Street, the Cyclone reaches a maximum speed of 60 miles per hour, carries 24 passengers, and boasts a total track length of 2,640 feet. As the second-steepest wooden roller coaster in the world, the Cyclone features an adrenaline-charged plunge measuring 85 feet at an uncompromising descent angle of almost 60 degrees. Exhilarating drops, curves, 27 elevation variations and a sinuous layout have made this iconic wooden coaster a timeless classic and after more than 90 years of operation the Cyclone is still delivering thrills. Highlighted in major films, music videos, and works of art, the Cyclone is a cultural phenomenon and one of Brooklyn’s most iconic sites to visit.

The Mother of roller coaster enthusiast culture and the “Big Momma” of Coney Island the Cyclone tops everyone’s list of things to do in New York City. Find out what the hype is about and ride a piece of history at Luna Park in Coney Island.

**The Cyclone is both a New York City Landmark (1988) and listed in the National Register of Historic Places (1991). 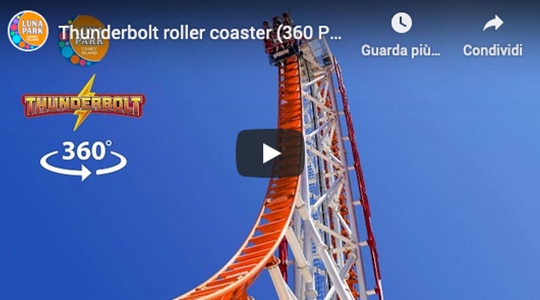 As New York City’s first ever major steel roller coaster and the first of its kind, the Thunderbolt, made its worldwide debut in Coney Island in 2014. The new coaster pays homage to the historic Thunderbolt roller coaster that was originally built in 1925, operated into the early 80s and was demolished in 2000.
Although the new steel marvel flaunts an historic name, it is distinctly different from its famous wooden predecessor. The Thunderbolt, showcased at Luna Park in Coney Island, is crafted from steel, features a nine-seat car with a state-of-the-art restraint system, an audacious 90 degree drop, with inversions, turns, and enough G-force to captivate the most intrepid visitors. The impressive orange colored steel behemoth’s twisted layout erupts into the cityscape mesmerizing spectators from near and far. Experience the 2,233 feet of steel track, twists, bends, and plunges that thrusts Luna Park in Coney Island into the forefront of the future of amusement parks and casts a Thunderbolt into Coney Island history for a second time. 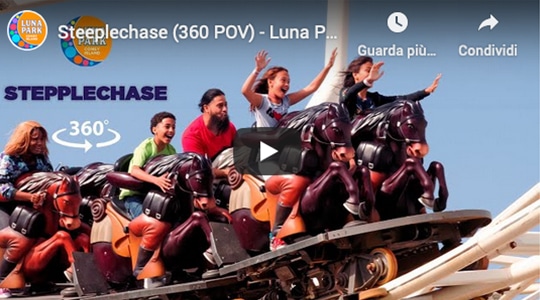 With a nod to the signature attraction of the historic Steeplechase Park –Steeplechase at Luna Park in Coney Island invites guests to feel the open-air experience of racing at the derby and the nostalgia of Coney Island’s past. The equestrian themed coaster is equipped with saddle like seats and innovative harnesses that allow for the carefree sensation of horseback riding. Saddle up and get ready to go 0 to 40 mph in less than 2 seconds while you giddy-up along a 1,476-foot track, featuring a series of “jumps” and 65-degree curves that would challenge the best of jockeys.

Steeplechase is the perfect ride for anyone chomping at the bit for fun! 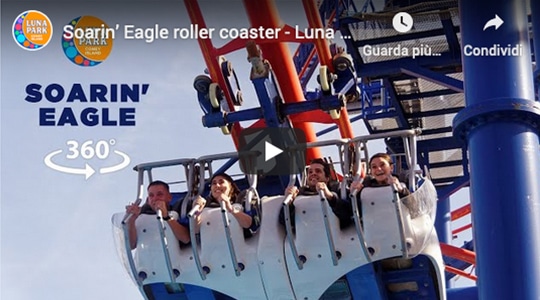 Soar Through the Sky on a Coaster That Flies! Birds of a feather flock to Luna Park for an exciting ride on our very own steel roller coaster that mimics the flight of America’s most majestic bird. Board a four-across eagle-inspired train, set your sights on the horizon and feel the anticipation build as you embark on a deliberate climb up a spiral lift hill. Let out a mighty scream as you drift off in free-flowing flight over 1,293 feet of track at speeds up to 41 mph through a series of heart-line inversions, hairpin turns, barrel rolls, sudden drops and exciting twists sure to lift your spirits. For a gravity-free attraction in Brooklyn, set your flight path for Luna Park to ride the Soarin’ Eagle.